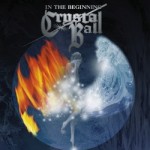 It´s a time of changes for Swiss hard rockers CRYSTAL BALL: in late 2010 Mark Sweeney left the band, to focus on his new project WOLFPAKK. So CRYSTAL BALL are currently looking for a new vocalist.

On  May 27th, the band´s classic album “Hard Impact” was finally re-released, and fans of first class Swiss hard rock can look forward to another highlight: CRYSTAL BALL`s rare debut album “In The Beginning” will be re-released onJune 24th. The new edition comes with the bonus track “Silence Of The Night”. “In The Beginning”, even though considered to be on of the best hard rock album of the late 90´s, wasn´t available regularly for many years and therefore was dealt for horrendous prices.

Also CRYSTAL BALL recently launched their own Youtube channel.
Here you can watch all of their video clips, including “Me And You” (from the “In The Beginning” album).

Hot News: Crystal Ball – “Anyone Can Be A Hero” Videoclip