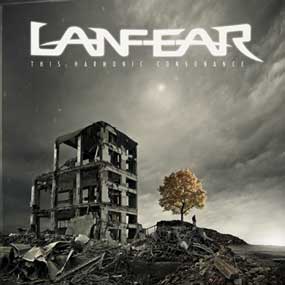 The German band LANFEAR was founded back in 1993. Since their debut-album „Towers“ (1996) until now they have released five studio albums, which brought a lot of attention to the band as excellent musicians and songwriters. They play slightly progressive, European-styled Power Metal with a lot of melodies and powerful doublebass-drumming. Bass player Kai Schindelar plays in Sacred Steel as well.

„This Harmonic Consonance“, their first release on our label, comes up with ten great produced tracks and 49 minutes approximate playing time with many traditional and also a few modern influences. Every fan of well-played Metal will definitely be convinced from that album for sure! Front man Nuno has a clear, strong voice. He is also capable of high-pitched vocals or real shouts, like in „Camera Silens“. Also some keyboards are featured here to create some atmosphere. It’s not too bombastic at all. One of the highlights of the album is the eight-minute epic track „Idiopathic Discreation“.