California death-thrashers SACRIFICIAL SLAUGHTER will team up with tech-metal outfit ISOLATION IN INFAMY and MADROST for the “Sickening Southwest Tour III,” which kicks off September 23rd in Los Angeles. Dates are as follows: 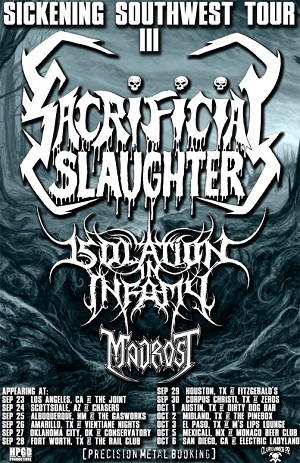 The tour is booked around the Building Temples From The Dead Fest, which will take place on September 29th at Fitzgerald’s in Houston, TX. The fest will feature performances from SACRIFICIAL SLAUGHTER and ISOLATION IN INFAMY, along with INGURGITATE, HOD, DESPISE THE SUN and many more, for a total of 21 bands brutalizing two stages of the course of one day. For details on the fest visit this location. 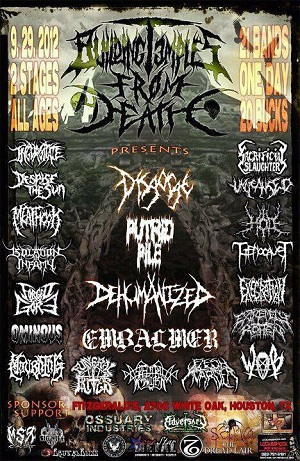 The tour also includes a stop south of the border with an October 5th date at the Monaco Beer Club in Mexicali, Mexico. Support will come from RUDE AWAKENING and EXTINTOR. Details on this exclusive Mexican date can be found at this location. 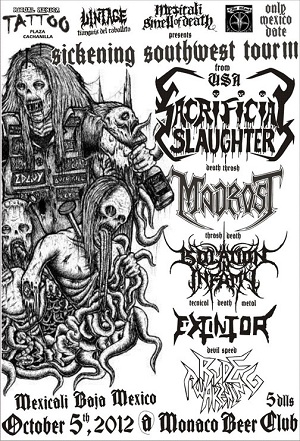 SACRIFICIAL SLAUGHTER‘s most recent offering, the American Death Thrash split with Oklahoma’s ENFUNERATION, was released last year by Horror Pain Gore Death Productions and is available at this location. The band has plans to invade Europe later this year and is currently finalizing a month-long North American outing with death metal pioneers MASTER, set to get underway in March of next year.

A promo video for “Ruthless & Truthless” from American Death Thrash, can be seen here.

For more on the tour and the bands involved, visit the links below: